What holds the universe together? 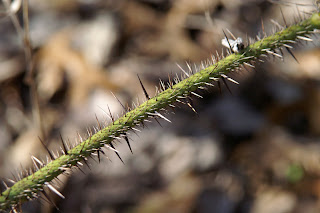 What is the universal glue that keeps everything bound together? If you walk through the woods here, it only takes a few moments to figure out the answer. It's not gravity, or molecular attraction. It's Smilax tamnoides, the bristly greenbrier.

This vine is one of the dominant plants in the woods. It springs straight out of the ground and pushes up up up up, until it either falls over under its own weight, or until it touches another plant. Then it sprouts a tendril, latches on, and commences some serious climbing. It makes wild leaps from tree to tree, forming thick mats that are impossible to walk through. These vines are tough. As if the unbreakable vines themselves aren't trouble enough, they come well-equipped with infernal needle-sharp bristles. Close to the ground, the prickles look like whiskers on an extra from The Godfather. Further up, the thorns are less spiky--more like thorns on a rose.

Because they're so tough, they don't seem to stretch much. They're always under some tension. It's wise to remember that when you go in armed with pruning shears, ready to do a little vine trimming. One cut will cause the vine to lash out in all sorts of unexpected directions. I'm forever getting whacked in the arm. A particularly evil specimen once twined itself around my leg. When I cut it, the infernal thing took careful aim and launched itself at that soft pad of flesh at the base of the thumb. Not satisfied with merely punching holes in me, it pierced the skin, then slid sideways, breaking off those little black needles and leaving them embedded. Much of the rest of the evening was spent with a sterilized needle, tweezers, and a bright lamp, picking at the little spears.
Posted by Joy K. at 1:29 PM No comments:

Maybe you shouldn't lean back on the railing just now.

We're solitary people by nature, but every now and then someone visits. We were sitting out on the deck enjoying drinks with some friends from my husband's work. I glanced at the deck railing and saw a bit of movement behind Karen's head. Bee? Moth? June bug? No, it was something a little more unusual. 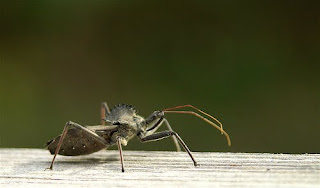 This is a Wheel Bug, Arilus cristatus. They're rather large and dramatic-looking. Part of the drama is due to the size: this one was easily an inch long--more if you count the long antennae. Its movements are eerily robotic: it walks slowly, moving one stick-like leg at a time. It also flies clumsily, with a loud buzzing sound. The whole time I was trying to get some pictures, I kept thinking that if it flew and landed on me while I was trying to focus the camera, I'd have a stroke and die. There was a particularly scary moment when the auto-focus was having a hard time, zooming in and out. By the time it stabilized, I was looking at an empty piece of railing. "Hm. I see where the bug was. I'm kind of afraid to look around to see where it is."

I can safely call this a bug because it really is one of the true bugs, belonging to the order Hemiptera. True bugs have mouths that have evolved into beaky sucking things. In this picture, you can see the "beak" tucked back under the head.

Most bugs use that structure (really it's called a "rostrum") for sucking the sap out of plants, like aphids. A good look at a Wheel Bug's rostrum makes you think that it's after something a little livelier than your Aunt Miranda's rosebush. You'd be right: this is a member of the family Reduviidae, the formidable Assassin Bugs. I keep seeing this family of insects referred to as "the gardener's best friend," although I don't know a lot of gardeners who can really get on board with that assessment. A Wheel Bug doesn't look like anyone's BFF. It preys on hapless insects, piercing them with that rostrum, and injecting them with a powerful digestive enzyme. It can then easily suck up the liquified bug innards as though it was sipping a chocolate malt. If handled, it's also happy to pierce human flesh and inject that same enzyme, which is reported to be a spectacularly painful event.
Posted by Joy K. at 9:30 AM 2 comments:

I think the wayward tail in the previous entry probably came from one of these: the Five-Lined Skink, Eumeces fasciatis.

Skinks belong to a branch of the lizard family tree. They're characterized by slick shiny scales and a "snaky" body and movements. Their lack of a distinct neck adds to their snake-like charisma. The Five-Lined Skink is pretty common in North Central Texas, in woodland areas where conditions stay a bit damp. That lovely blue tail is a sign of a juvenile. Sadly, the blue fades to greyish as the skink ages, especially in the males.

They're frequent visitors to our porch, stalking around looking for insects. This one was hanging around enjoying the warm wood of the railing. I was amazed that it let me get so close with my intrusive camera: this picture was taken while I was only a couple of feet away. I guess it was confident in its escape abilities: when disturbed, they move so fast they seem to disappear.
Posted by Joy K. at 7:00 AM No comments:

Some things aren't supposed to move 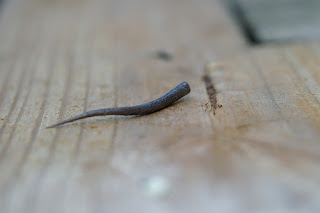 Earthworms can move more than you might think. When there's a worm on the surface and you touch it, it may go through a whole series of spastic contortions as it tries to evade you and your hungry maw. Not too different from people, actually. Try sneaking up on a loved one and tapping his/her neck gently. You'll probably see similar gymnastics.

When I first saw this critter on top of the cedar mulch in the backyard rose garden, I thought it was a misplaced worm. It was writhing from side to side, apparently trying to find a patch of soft moist soil. My first thought was that I'd scoop it up and relocate it to a shady damp patch under some ferns. When I touched it, it leapt about 4 inches up in the air. Hmm. Rather energetic for a worm, but I guess there are Olympic-class athletes even in the Annelida phylum. After a little more wrestling, I got the thing in the palm of my hand, and finally took a closer look. Hey: that's no worm. It's the wrong texture, and it tapers too much, and why is the thick end sort of...raw-looking? It finally dawned on me that I was looking at the hastily discarded tail of a lizard. Five-lined skinks (Eumeces fasciatus) are very common around here, so I'm guessing that's what kind it was.

Some lizards will unattach a portion of their tails when they're being pursued--a sort of sacrificial rear-guard. The tail twitches and hops around all on its own in a most distracting way, allowing the more important parts of the lizard to escape. This one hopped and squirmed and rolled around for about 5 more minutes before relaxing into floppiness.

I never did see the lizard. I guess I was distracted.

Email ThisBlogThis!Share to TwitterShare to FacebookShare to Pinterest
Labels: tail

Fortunately, it was cold outside 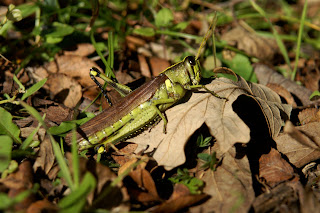 As a rule, I like bugs and other creepy-crawlies. When there's a spider or wasp in the house, I'm the person who deals with it, trapping it in a sophisticated cage consisting of a juice-glass and a magazine's subscription card, then tossing it outside. I've fished bees out of a swimming pool, laying them out on the leg of my blue jeans to give them a chance to dry off before buzzing away.

There are, however, a few insects that can reduce me to the squealing stereotype of a bug-hater. Grasshoppers are one of those. There's something about the suddenness of their leaps, and the grasping nature of their legs when they land on me with a thud, that overwhelms my otherwise bug-o-centric nature.

I'm happy to announce, then, that the very chilly air this morning slowed down this fellow enough that I was able to approach him without fear. (Well, without as much fear as I usually feel) I've tentatively identified him as the Obscure Bird Grasshopper, aka Schistocerca obscura.
Posted by Joy K. at 3:43 PM No comments: