Often, there's a specific event that tilts someone from "enthusiast" to "fanatic." My obsession with the living things in the Not-So-Big Woods sprang from one small event that occurred just over a year ago.

It was gorgeous spring day on April 11, 2009. The sun was shining, and the wind was stirring the leaves gently. Awesome Husband was toiling under the deck, attaching it to the house (a step the previous owner had overlooked, preferring instead to lean it against the house and pound a few nails randomly here and there). My job was to stay nearby and fetch tools, nails, large pieces of lumber, and bandages as necessary.

I waited for orders in a swinging chair in the backyard, watching the birds and enjoying the sound of their wings as they flew between the trees and a thick layer of sunflower seeds laid out on the deck railing. A loud flutter grabbed my attention: a bird was very close. In fact, it had landed on the canvas back of my swing. I went statue-still. Inside, of course, I was squealing "THERE'S A BIRD ON MY CHAIR!!"

Then my eyes widened beyond their previously known boundaries: the bird had dropped down to my shoulder. "It's on my shoulder!!!" I didn't scream. "DID YOU HEAR ME?" (of course you didn't, I didn't make a sound) "THE BIRD IS ON MY SHOULDER!!"

Then it made a leap to the top of my head. I could feel the little claws digging in. I gritted my teeth as the sharp beak pecked through my hair. Inside, I alternated between an internal "OW!" and "THERE'S A BIRD ON MY HEAD? WHERE ARE MY WITNESSES??" Then the bird went still up there. The pain went away, and I was still left to the absolute joy of having a wild bird perched on my head. The bliss ebbed a bit as it bent down and painfully wrenched a few hairs from my head ("OUCH!!") and flew away. I was finally able to see it as it departed: a tufted titmouse, happily taking home some padding for the nest. 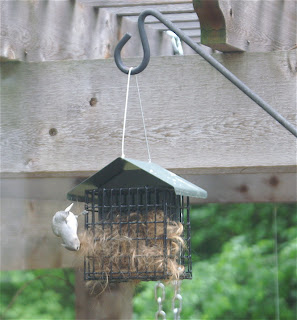 Fast forward about one year. I've just had a major haircut. At my request, the stylist collected all of my leftover hair so I could take it home and stuff it into an old suet box. I desperately hope that this is last year's bird, getting a big beakful of nest liner to take back home.
Posted by Joy K. at 9:02 PM