I'm sorry. I accused you falsely. But you have to admit: the circumstantial evidence was plentiful.

Squirrel, do you remember the day I looked out the window and found you curled up inside the "squirrel-proof" bird feeder, merrily chewing away at the goodies within? And aren't you the critters that march like furry tanks across the seeds spread on the deck railing, leaving a trail of shattered and  empty shells in your wake?

And raccoons: really, can you blame me for being a little suspicious, when "search and destroy" seems to be your motto? Remember the suet feeder? You took it. Not the suet, oh no! You took the WHOLE FEEDER from its chain on the porch. We did find it, you know, months later, in the crawl space under the house.  Its little door was pried open, and the suet was long gone. I don't even want to think about the hummingbird feeder. It wasn't enough that you had to open it and drink it dry: you pulled off the little yellow flower-shaped wasp-guards, too. We never did track down the last two.

Because of this history we have, little mammals, you can understand why I thought of you when the peanut feeder went empty so fast. Less than 4 hours to completely run out of unshelled peanuts? There's NO WAY mere birds could do that.

Except... Shouldn't there have been empty shells on the ground under the feeder? You two tend to dine in, rather than resort to carry-out. And, now that I think of it, the emptying was done during the day, which doesn't sound like Mr. Raccoon.

Who, then? It was clearly time for clandestine surveillance. 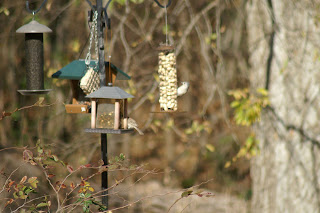 I see that I underestimated the persistence and tenacity of our brash titmice. When a bird swoops in and removes a nut roughly every 60 seconds, the feeder goes empty quite fast, actually. 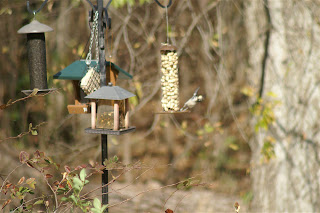 So, raccoons and squirrels, I offer my sincere apologies for accusing you unjustly. 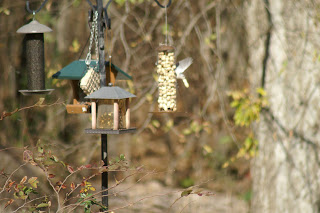 Even though you had it coming. 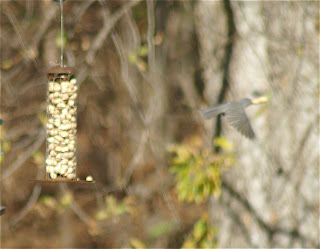 Afternoon car-rider duty at school is pretty simple: hang out with the kids at the back of the school while they get picked up and taken home. There's rarely any drama beyond the occasional phone call by a "forgotten" child. "I was supposed to pick you up? I thought your dad was going to pick you up! I'll be right there!"

Therefore, it was quite surprising when we heard the screams, and saw the group of kids leap from the ground and scurry about ten feet away from where they'd been sitting in the grass.  "Problem?"  a teacher asked.

And indeed there was. A snake had slithered over, probably hoping to help with homework, but had been soundly rebuffed. He was beautiful, and very calm, although none of these qualities seemed to endear him to the kids. "Are you gonna kill it?"  "Um, no, but I think I'll take it home so no one else decides to do just that."

The agreeable snake stayed in one spot while I dashed into the building and got a big cardboard box from the storage room. Then we tackled the problem of how to get him into the box.  "We could pick him up..." No one was volunteering.  Almost as a joke, I asked "What if we just put the box on the ground and nudged him. Think he'd just crawl in?"  I got a solid round of "Yeah, right" looks, but when I put the box down and nudged the snake with my foot, he slithered right inside.   All of the yeah-righters were wide-eyed with awe. I was pretty amazed: how often does wildlife do what you want?

The snake came home with me, and was released into the backyard on the edge of the woods. He was reluctant to leave the box but he did finally slide out into the grass, then into the leafy floor of the woods, where he vanished. 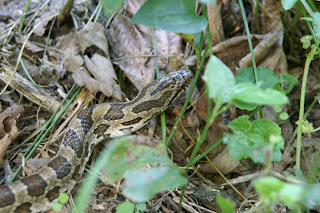 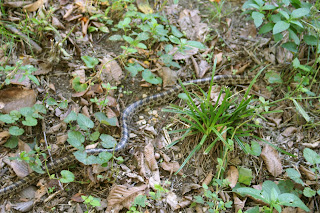