I just wanted a picture of a garter snake. I had a beautiful snake present itself to me once, its yellow and orange stripes practically glowing on a glossy dark background. I even had a camera in my hand, but the neighbor's dog scared it away just before I got the shot.

Awesome Husband was so charmed by my "artist's rendition" at the end of that post, he re-created it in neon, and hung it in the garage for my birthday. Every time I drive in, the neon snake lights up to greet me.

Still, I mourned the lost photograph.

I got my chance a few days ago, while refilling the goats' water bowls. As I bent over one of them, I saw a tiny cricket frog that seemed to have one leg stuck beneath the bowl. "Poor thing," I thought, and lifted the bowl to let it hop away, but it didn't move. Something long and very thin was stuck to its leg, keeping it from moving.

My brain needed a moment to process what I was seeing. A very small snake was coiled under the water bowl. The snake, not the dish, was keeping the frog from hopping away. When I removed his hiding place, he slithered over against the shed wall, frantically trying to escape and swallow his meal simultaneously. I think the snake is a Western Ribbon Snake (Thamnophis proximus proximus), a very slender member of the Garter Snake clan. 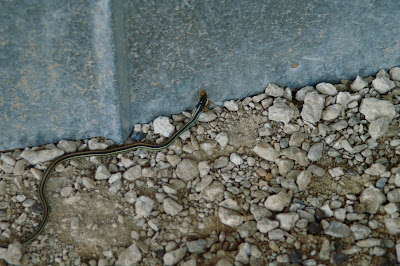 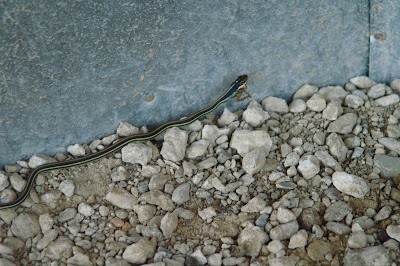 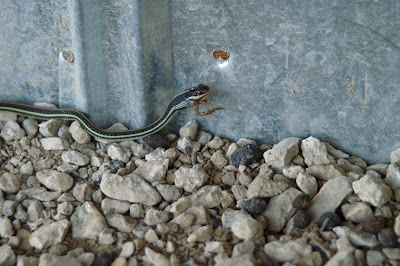 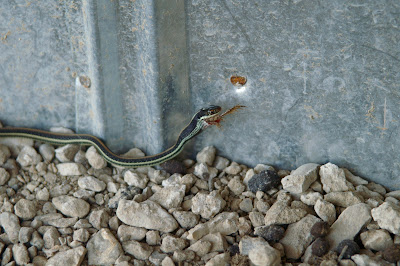 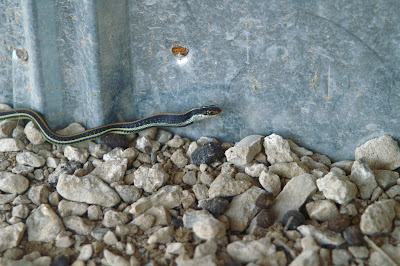 It's been a while since I've been here. Two things kept me away for a bit.

#1 was the summer heat. August was a blast furnace, an oven turned up to "broil." It was a succession of days when the thermometer soared, and dragged the dew point along with it. Even darkness brought little relief: the ground had absorbed so much heat that it sent it back at you long after the sun went down. The thought of going outside, even for a few minutes, lost a lot of its luster. Today's high was only 92 F. I thought I might have to put on a sweater.

Reason #2 was that my mind was elsewhere. The family has grown a bit--we've added 28 new legs. Five Nigerian Dwarf goats and 2 livestock guardian dogs have joined us, and the learning curve has been steep. 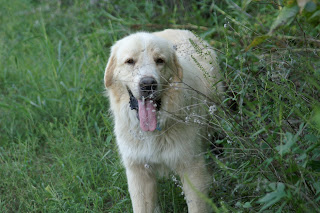 This is Gus. He's almost four years old, and trained as a guardian dog. Part Great Pyrenees, part Anatolian Shepherd, he's enormous. He's got a ferocious deep bark, big slobbery jowls, and liquidy brown eyes. In spite of his guarding experience, he's remarkably easy-going, letting us probe around his footpads when he developed a limp. 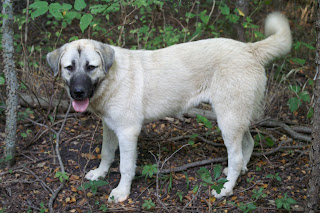 Annie is Gus's companion dog. She's a mix of the same two breeds, but she shows her Anatolian side, while Gus looks much more like a Great Pyrenees. She's not quite a year old, so she's still a "puppy." Annie is the reason we learned to string electric wire along the top of the fences. She's an escape artist who can climb a gate in about 3 seconds. When we brought them home, she had to learn that the goats aren't chase toys. She still needs the occasional reminder. 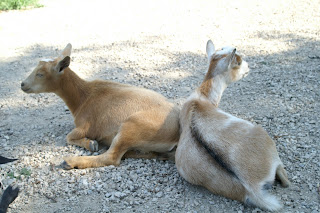 Our two smallest goats are known as "The Twins," even though they aren't, actually. They are half-sisters, and you rarely find one without the other nearby. They're younger and smaller than the other goats, and currently lowest in status, but they're starting to give back what the others dish out. On the left is Lunazul. The other is Fairy Dust. They're our blue-eyed beauties. They were bottle-fed as kids, so they're the most people-friendly. 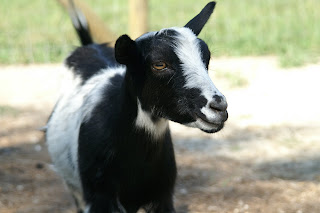 Black-and-white Zenyatta goes by "Zen." The nickname implies a state of mind that she doesn't really possess. Her bleat is high-pitched and very different from the others. When the goats first arrived, she was the loudest and most insistent about her displeasure. She cried over and over, finally calming some when I forcibly hugged her. She was the first to request affection. 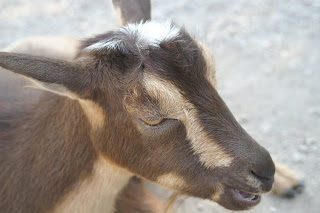 Pearl is a beautiful rich brown color. She loves to be brushed. Over and over and over. "More brushing, please. I think you may have missed a spot. Perhaps you should start over, just to be sure." 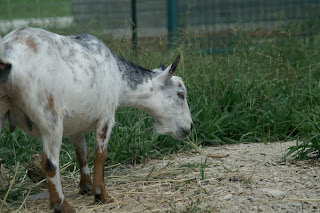 This is Nora, Queen of Standoff-ishness, and the largest and most dominant goat in the herd. She does not fear us, she simply doesn't seem to like us much. When we walk toward her, she meanders away, just out of reach. If I'm very quick, I can get to her with a brush, and she'll allow me to pet her while the brushing is happening. I can get in a few quick pats while she's eating grain, but that's all so far. I'm nothing if not persistent, though. She'll love me eventually.

So, now you know where I've been. Now that the weather has turned positively chilly, I'll be outside more. I'm already drafting the next entry, which has a backstory.
Posted by Joy K. at 11:29 PM 6 comments: