You're looking a little pale....

Color is the first thing I notice when I look at a bird, trying to figure out what it is.  Red = cardinal.  Blue = blue jay.  Grey/white = Tufted titmouse. Every flippin' color under the rainbow = painted bunting.

When it's winter, black on top, white on the bottom = junco. They're the first birds that really signal the appearance of winter. Tiny and chirpy, they're the reminder to pull out my heavy coat and make sure that each glove has a mate.

The junco flock from this last winter brought a bird of a different color. It was so different that I wasn't sure at first that she (?he?) was a junco at all. Rather than charcoal and ivory, this bird resembled a toasted marshmallow. 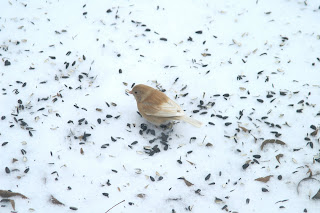 I named her "Lucy," because the condition that lightened her feathers is called "leucism." It's not the same as being an albino. There's pigment there, it's just not as much as usual. I think Lucy's case is interesting because the color pattern is different from a normal junco. Junco's are top vs. bottom colored, not front vs. back, like Lucy.

Another form of leucism is called "pied." Imagine a section of feathers dipped in bleach.  I've never seen one in person, but pictures of pied birds always make them look a little embarrassed. The rest of the flock didn't seem to treat Lucy any differently than the other birds. It makes me wonder how much they respond to their own colors.
Posted by Joy K. at 8:33 PM 4 comments: