It's relatively quiet in the Not-So-Big Woods. The hummingbirds have moved south. We spotted the last one, frantically drinking from the feeder, on October 2. Our year-round residents, the tufted titmice, chickadees, and cardinals, are taking much less food from us than usual. I guess they're filling up on the autumn buffet available in the woods, because their visits to our cafe are of the "grab and go" variety, rather than a "stay a while and fill up" encounter.

The house finches are gone, taking their chirpy quarrels with them. I think we have two populations that visit. One stays with us during the warm season, raising their little ones here, then they disappear when the days get short. Another group must breed further north, and they arrive more-or-less synchronized with the annual goldfinch brigade.

Right now, it's like the calm few moments before a giant gust of wind brings a downpour. I know my winter friends are coming, and hungry.
Posted by Joy K. at 9:35 PM 1 comment:

I think the deciding factor in whether someone is an "autumn person" or a "spring person" depends on how much they despise the previous season. Summer here is a horrifying succession of sultry nights and blazing white-hot days. I am an "autumn person." Awesome Husband hails from Chicago and Wisconsin.  Winter is tough in the great Northern Lands. Thus, he is a "spring person." Or he was, anyway. I think 10 Dallas summers may be bringing him around to my point of view.

Dallas autumn drifts in quietly, shy and unassuming. One morning you notice that the dawn air doesn't feel like a poorly wrung-out sponge. That first hit of fall air isn't exactly crisp, but at least it isn't soggy. Don't let that fool you: high temperatures will still dance in the 90s for a while, but at least there's a break when the sun goes down.

You can't really count on the foliage to cue you in to the presence of a new season. Traffic on the big highways can be pretty horrifying, but the slow-downs aren't caused by hordes of tourists with cameras, agape over the brilliant colors, because there aren't any. Most of our trees don't exactly burst into blazes of color. They generally turn a sickly yellowish, then brownish, then some of the leaves drift to the ground, while others hang around looking anemic until a big rain, when they plop soggily into squishy piles. We're at the "green fading to blotchy yellow" phase right now.

The spiders know. Silken bundles of spider eggs are showing up all over. This past summer was overflowing with Argiopes. They were everywhere: in the garden, suspended from the back steps, hanging from the awning of the goat shed, lounging in the fig tree, jostling for position all up and down the fence row. I named the goat-shed spiders Jennifer and Bailey. Jennifer vanished early on, but left behind a neatly sewn bag of eggs. Bailey saw that as a challenge, and managed to produce THREE egg sacs before I discovered her tattered, empty web one morning.

All of that egg-making and web-spinning takes its toll. Usually, I just find the webs as I found Jennifer's, and then Bailey's: torn apart, with the resident queen missing in action. I've always assumed that something wrenched them from their lair, and maybe that's often true. But I've seen firsthand this year that sometimes, they just die. 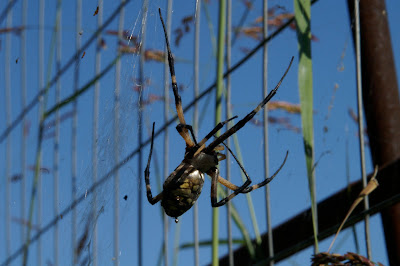 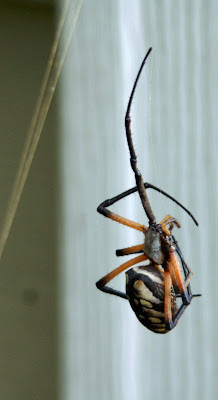