Some arachnids wander through the garden, searching for prey. These are not web-weavers, although they often depend on a silken dragline. They hunt and pounce with catlike precision, earning themselves the name of Lynx. 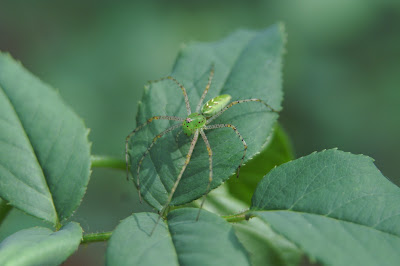 Green lynx spiders (Peucetia viridans) are common in this area, although not commonly seen. Their jewel-toned coloration is formidable camouflage, allowing them to hide in plain sight, patiently waiting...waiting...

This one perches on a rose leaf. Unlike most of the invertebrate world I try to photograph, she stayed still, posing in the patchy sunlight filtering through the walnut tree. Green lynxes tend to stay in the same area for a while. An hour later, I went back outside to find that she was still there, still watching.
Posted by Joy K. at 1:02 PM 6 comments:

Peripheral vision caught me again, calling my attention to the side, when I'd been intent on moving down the sidewalk. This time, a tiny movement inside a a ceramic bowl that was left outside during a rain slowed my steps. The bowl contained about half an inch of water, a large wolf spider, and a pile of squirm.

Interesting: I've never seen a pile of squirm before.

I tipped the bowl over onto a rock in the garden, thinking the spider might still be alive since the water wasn't especially deep. In fact, I wondered why she hadn't just crawled out--it wasn't like the depth was over her head. The spider didn't move. The pile of squirm separated itself into two smaller squirmy piles, and writhed around on the rock for a while, before crawling into a crack in the damp earth.

In the video, the spider is well-camouflaged and hard to see, but she's on the left side of the screen, about midway down.

At the time, I was completely mystified. How did two strange-looking worms happen to end up in the same bowl as an enormous arachnid? I wish I'd paid more attention to the spider, because now I know the connection between everybody in the bowl. The squirmy things are a couple of horsetail worms. These members of the roundworm family parasitize insects, spiders, and similar organisms. Apparently, having these little guys inside you makes you thirsty, so you hang around water a lot. When the worms are ready, they emerge, killing their host, and swim away in the pool of water nearby. There, they lay their eggs on vegetation in the water so the cycle can start all over.
Posted by Joy K. at 9:27 PM 6 comments:

There are a lot of well-known architects and engineers in the animal world: beavers, paper wasps, termites,  and naked mole rats come to mind. Just within my garden, a variety of critters create shelter using plant leaves. Any stroll will reveal leaves folded or rolled and sealed with silk. I opened up a leafy taco-shell, causing a spider to rush out in arachnid rage, shouting the spidery equivalent of "Get off my lawn!"

This caught my eye on a recent dog-walk. I've never seen a shelter shaped like this one. I don't think I could create it with my ten fingers and big brain. 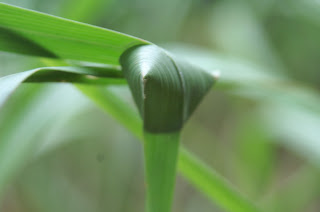 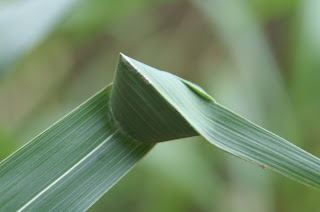 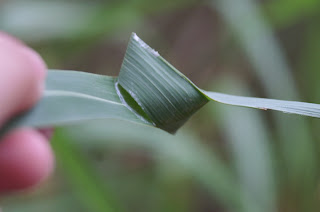 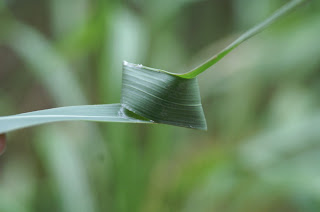 The Return of Sleepy Wren

Last night's wren visit apparently wasn't a one-off. Five minutes ago, I glanced up when a juvenile cardinal popped inside the globe feeder to get a bite. A few seconds later, a Carolina wren landed on the deck railing, and stood there, not eating or scratching around. Instead, she stared up in the direction of the occupied feeder. Or maybe it's a he: I get so impatient with those darned non-sexually-dimorphic birds!

Cardinal kept eating. Wren kept staring. Could it be....

I made just enough of a movement to encourage the cardinal to fly out of the cage. Maybe 10 seconds passed, then the wren flew in, fluffed her feathers, and relaxed. She's there now, crouched on the tray at the bottom of the feeder, apparently quite satisfied with her new sleeping quarters.
Posted by Joy K. at 8:44 PM 2 comments:

We have a  bird-feeder with a globe-shaped wire enclosure around it, hanging just outside the living-room window. A Carolina wren has popped inside the wire cage, fluffed its feathers, and settled in for the night. I'm on the couch about 8 feet away, typing and watching TV.  I'm honored that she feels so safe, so close to me.
Posted by Joy K. at 9:02 PM No comments:

The Roach, The Raccoon, and The Blog Writer

Living out here in the Not-So-Big Woods, I'm used to bees and wasps buzzing around the inside of the windows, and spiders skating in the bathtub. Most of these critters get the upside-down juice-glass & subscription-card routine: scoop them up, and fling them outside.

But not the American cockroaches. These are demon insects, growing to lengths of 1.5 feet inches, and able to scuttle along at 3,000 miles per hour. I don't like them. They're one of the few insects that are immediately squashed when we find them inside. Awesome Husband squishes them with a paper towel; I prefer a fly swat--when I can find one. Right now I'm beating them to a pulp with a half-empty roll of giftwrap.

Last night, I was sitting in the living room. It was very dark outside. Although I could only see a few inches out the windows, I could easily see the Giant Roach crawling on the outside of the glass. It was looking for a way in so it could kill me. I'm sure of it. Suddenly, out of nowhere, a raccoon materialized, smashed the roach against the window, wrenched it off, and ate it. With the monster disposed of, the raccoon rescuer lumbered off. It was like stepping into a Disney cartoon.
Posted by Joy K. at 7:16 PM 6 comments:

Awesome Husband and I escaped the Texas heat for a week, fleeing to Seattle and surrounding areas.  One of the places we visited was the Hoh Rainforest on Washington's Olympic Peninsula, where about 80 million shades of green assault you as you walk through. Conifers like spruce, hemlock, and fir rule the area, dripping with an array of mosses, while the ground is invisible beneath ferns and oxalis.

Imagine that you're a little spruce seed, getting ready to drop from your parent tree. It's exciting to be sailing toward the ground, knowing that all you need is a fertile patch of ground that gets a little sunlight and some water, and you'll be on your way!

You look down and get a bit of a jolt. 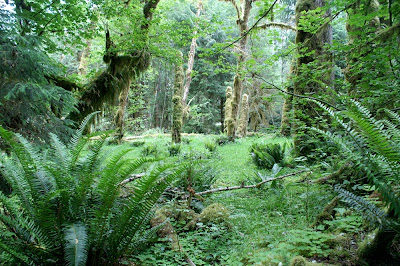 Living here in the rainforest as you do, getting a damp patch of ground won't be a problem. Getting a shot of sunlight, though, will take some clever planning. There's just not much clear ground here. In most forests, fires do the job of opening up the canopy and burning off the undergrowth so that new seedlings can get a start. Being a RAINforest, though, fires aren't common here. As many shivering hikers have discovered, wet wood doesn't like to burn. The thick canopy of the ancient trees only lets patchy light through, and the carpet of ferns block most of that from the soil. What's a young seed to do? 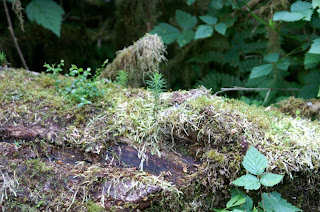 If you're a smart youngster, you aim for a rotting log. Fallen logs can help supply two scarce resources. Rich nutrients are locked up in the decomposing wood, as well as natural fertilizer in the form of decayed leaves and animal scat that accumulates in the cracks. Not only do the downed logs provide nutrition for hungry seedlings, they rest above the layer of oxalis and ferns that block the sun from a new wannabe-tree. (See the tiny little spruce tree there?) 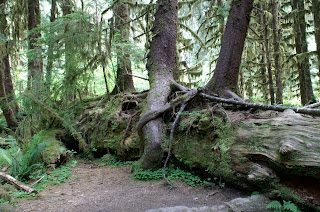 As the new trees grow, they send down long roots that look like sinuous legs draped over the decaying log. Because of the sometimes enormous diameter of those logs (called "nurse logs") the roots may have to be several feet long before they begin to penetrate the actual ground. The scene ends up looking as though a tree-person is straddling the log, with long legs stretching for the dirt.

As time passes, the younger tree becomes firmly anchored around the nurse log, and it's often hard to tell where one ends and the other begins. The nurse log continues to decay, a process that may take over a hundred years to complete. When it's gone, it leaves behind a hole in the twisting roots of the younger tree. 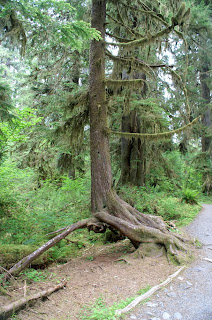 The final product is really dramatic when more than one sapling got its start on the same nurse log. When they're mature, you can see several enormous trees in a ridiculously straight line, all with the telltale hole in the buttressing root system. These groupings of trees are called "colonnades." The colonnade system is the primary way that forests in temperate rainforests renew themselves. 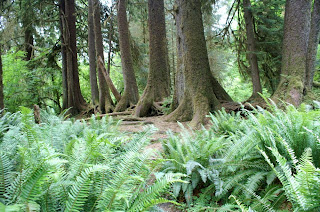