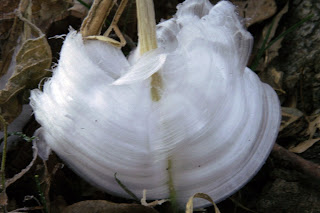 Life out here in the Not-So-Big-Woods is full of little mysteries. "What's that....?" is such a common question.

What's that sparrow-y bird?
What's that snake? No, not the one over there. The one that's RIGHT HERE!
What's that little puddle of slime?
What's making that screaming monkey noise in the woods?

This time, the question was "What's that odd white gauzy fungus?" I noticed it on the morning of one of our first freezes of the winter, gently wrapped around the stem of a dead plant. It looked swirly and graceful, like a skirt on a dancer, or Aretha's newest hat.

These woods of ours are great if you like decay, rot, and fungus. I've never seen so many different ways that dead things can decompose. This was one of the most beautiful fungi I'd ever seen. So ethereal that I didn't touch it, for fear of breaking off layers. I wanted to show my husband, but it was gone by the next day.

The next year, I saw another example in almost exactly the same spot. This time, I couldn't resist a gentle touch--just a brush of my fingertips to find out if it was damp, or soft, or brittle, or slimy.

What it WAS, was cold. It melted from the scant heat of my hand.
What it WASN'T, was fungus. It was made of ice. I don't mean ice over the fungus. The whole thing was a fairy-wing sort of ice formation.

Another year later, and I ran across a blog post by Dr. James Carter, with a very similar picture of this icy-phenomenon. It's known as an "ice ribbon," or "frost ribbon." The stem of the plant is actually pulling water from the soil, which is then super-cooled as it leaves the stem, forming this flouncy ribbon of ice. Dr. Carter's page has lots of examples of odd ice formations.