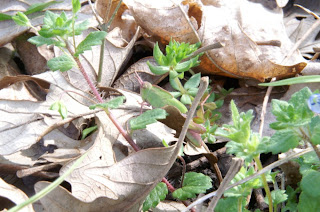 I belong to the "Assume something interesting is there, and crawl around with a camera until you find it" school of nature photography.

I spotted this guy when he jumped practically on top of me, then I lost him, then found him, then stupidly took my eyes off of him to glance up at some bird noise, then couldn't find him again, then he moved so I could see him. Then I took the picture before it was too late.

He sat almost perfectly still while I crept forward, until the camera's lens was only a couple of inches away. He was absolutely aware of me, perhaps wondering what kind of horrible lens-nosed monster-bird was after him. Knowing that concealment was the best form of protection, he willed himself to become part of the leaf litter as I approached. The only movement that I could detect was a painfully slow drawing up of his left rear leg, as he tensed for the jump he might have to make if his concealment failed him.

I slowly reached forward to pull a weed that was in the way of the picture. This was too much, and he fled a short hop away. I saw where he landed, and kept my eye pinned to that spot as I crawled over there.

I couldn't find him. I clearly saw where he landed, but I could NOT find him.

I thought about brushing my hand through the dead leaves and early spring plants to roust him out again, but I couldn't bring myself to do it. It wasn't fair, somehow. My survival didn't depend on finding him. I'd gotten the picture I'd hoped for. He won. His skills of hiding bested my skills of finding.