The temperature here in North Central Texas is currently colder than the northern half of Montana. The last time we rose above freezing was about 3 a.m. Tuesday morning. We had an ice pellet storm on Tuesday, which has congealed into a solid sheet of ice coating the streets and driveways. Most of the schools in the area have been shut down since then: the streets are simply too slick for safety. To add insult to injury, 5 inches of snow were dumped on us overnight.

The intense and continuous cold has led to an avian crisis: the birds need food. Lots of it. With temperatures dropping near single digits, the tiny birds that normally frequent our feeders can lose a significant part of their body weight in one night trying to keep warm.  Fortunately for my bird buddies, the school where I teach has been closed for 4 days, allowing me to maintain a pretty continuous buffet. Awesome Husband estimates that over 300 birds have dined at the Little House Cafe, where we've gone through about 30 pounds of black sunflower seed in 3 days, and too many cups of cornmeal/peanut butter suet to keep track of.

Our usual friends were there. Tufted titmice, chickadees, mourning doves, and cardinals know where to turn for a meal any day.

Their enthusiasm brought in some birds that are less familiar. The red-bellied woodpecker hangs around the trees all the time, but it's only since the weather chilled down that he came to the buffet line. He was initially attracted to the whole peanuts we were putting out for the blue jays, but he soon learned to like my homemade suet. His first approaches were timid and quick, only peeking over the edge of the railing while he perched vertically. Now, he hops around like he owns the place, and visits every day.


I'd been wondering where the Harris's sparrows were. They always arrive later than the other birds, like a mid-winter present. I saw the first few on Tuesday, sporting their characteristic black beret and bib. So far, nine of them have showed up.

Fox sparrows were unexpected guests. I've seen a few of them in the woods, but never in a close-up. They're bigger than I'd expected, just about the size of a cardinal, with gorgeous brown and grey feathers on their backs. Their bellies are streaked, with a smeary black spot on the chest. They have a distinct little double-scratch they do when they're searching for food: they jump forward, then scoot back a couple of times. It's not so effective when they're on a layer of ice, but it's awfully cute.

These chipping sparrows are enjoying the shelter from the biting north wind, nestled inside an overturned flowerpot.

After a party, there's bound to be a little debris. Each evening, the deck is littered with the detritus of the day, evidence of a lot of hearty meals. 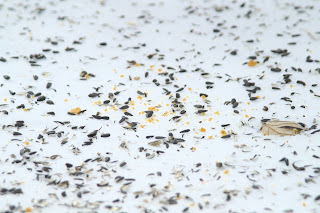