One Tree, in Close-Up

It feels like Spring in the Not-So-Big Woods. We're topping out around 68 F (20 C) today. Yesterday was even warmer. Three days from now, we aren't expected to get above freezing. Knowing that the cold front is coming is a push to go outside while I don't have to bundle up.

On our west side, there's a little worn slope that leads down into the riverbed. Just to the left of the slope I found a tiny path leading into the trees. That's one of those head-scratchers, because WE certainly didn't put it there.  It drops off into a river-eroded hillside, straight into a tangle of tree roots. My best guess is that it's a raccoon highway. 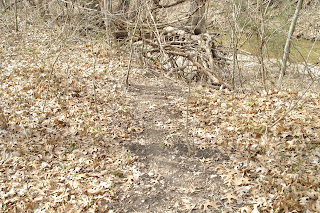 I walked down to the riverbed (NOT on the mysterious trail) to check out some of the trees that grow in precarious areas. The river is usually placid, but when we got a big rainfall, it fills up its banks with a roar of churning water. Soil is swept away from the trees lining the edges of the stream, exposing their roots. Eventually they tilt at crazy acrobat angles, then one day, they tumble, squealing and crashing.

The darkest tree in the middle is the one that caught my attention today. It's a little awkward to get close to it. The leaf-covered slope is slick, and stems of poison ivy stick up here and there.  Scores of small spiders dashed out of the way of my footsteps, probably screaming little arachnid versions of "AAAUUUGGGHH!" 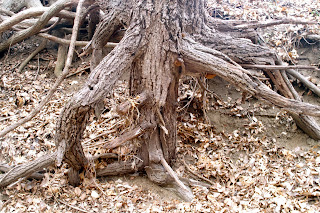 Up closer, it's easy to see the top of the enormous taproot, plunging straight down into the earth, providing a tenacious grip that gives way only under tremendous strain.

This looks like a branch, but it's actually a horizontal root. There's evidence that a bird uses it as a dining hall, munching the poison ivy berries that are abundant in that area, leaving little crumbs behind. 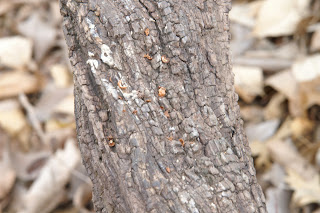 That same root provides meals for birds like woodpeckers and sapsuckers. Little holes drilled cleanly into the wood hint at the enjoyment of past meals. And...do you notice a couple of orange blobs? 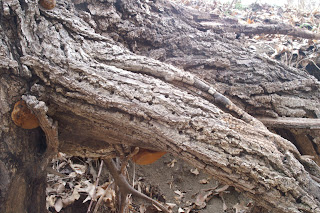 Two bright orange fungi add a little cheer, peeking out from the underside of the roots. The color is like pumpkin flesh. They're hard, like homemade biscuits left out on the counter for a few days. Soft velvet covers them, reminding me of the velvet on a deer's fresh antlers. 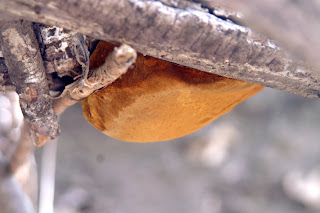 Countering the orange fungus, there's a miniature forest of green moss. Yes, as a matter of fact, it IS on the north side of the tree.  The craggy bark looks like the tortured twistings of mountain ranges when seen from an airplane, with tiny mossy trees adorning them. 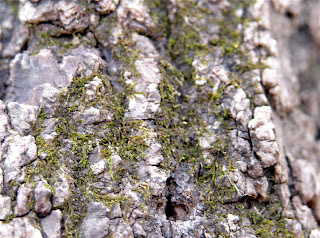 A funnel-web spider was peering out from her silky tube. When I jostled the bark a little, she retreated. Apparently, I didn't send out "come and eat me, I'm just a little innocent bug" vibes. 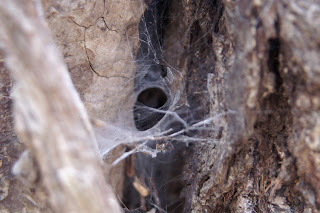